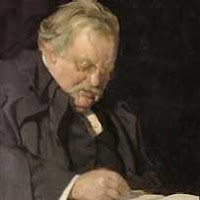 This is the old website of the G. K. Chesterton Library, a study centre and world-renowned collection of books, papers, and miscellanea relating to the great Gilbert Keith Chesterton (1874-1936).


The Library was originally built up by Mr Aidan Mackey, and maintained by the Second Spring Centre for Faith & Culture, with the generous support of the G.K. Chesterton Institute for Faith & Culture at Seton Hall University, NJ, and the Thomas More College of Liberal Arts, NH. The collection was owned and managed by the G. K. Chesterton Library Trust from 2006-2019.

We were excited to become partners with the Oxford C.S. Lewis Society, the Charles Williams Society, and the Owen Barfield Estate in sponsoring the Journal of Inklings Studies from May 2013, a peer-reviewed academic journal on the Inklings and their intellectual and religious debts and legacies. Other legacies of the Chesterton Library include Second Spring's Sane Economy Project, and the Sierra Leone Chesterton Center.

Gilbert Chesterton was a popular man of letters, a journalist, a poet, an artist, a traveller, a novelist, a philosopher. But he died in 1936. Why is he still so important... perhaps increasingly so?

He was one of the best – and most amusing – writers and thinkers of the twentieth century, and one of the strongest defender of the ideas on which Western civilisation is founded. (See "Larger than Life".) 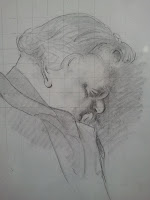 What is more, the quality of clarity and joy which we find in almost every page of Chesterton’s writing, intangible though it may be in terms of a practical impact on society, is a most precious legacy: the secret of lasting happiness, the responsibility of freedom, and the joyful duty of thanksgiving and praise.

The 2014 International Chesterton Conference, "Sanity and Sanctity", took place at a time when many were discussing the possibility of Chesterton's canonization, which in turn raised the question of his relevance to our times and to the wider world. The conference brought together the leaders of the American, the English, and the Italian Chesterton Societies to discuss questions related to Chesterton’s holiness. Present was the Bp of Northampton, Peter Doyle, and the priest, John Udris, who is entrusted with the task of looking into the feasibility of Chesterton's cause.

The Chesterton Library is dedicated to maintaining a study centre through which interest in GKC will be encouraged and scholarship promoted. A Chesterton collection in England with potential for meetings and research is important for many reasons… Chesterton was not merely a great English writer (an influence on the Catholic revival and the Inklings) but a bringer of joy in his personal life. That joy is needed today, in a landscape made barren by unhappiness and cynicism.

More and more books are being written about this gentle English giant, and you can read more about him by following the links on the right. These links tell a story. The UK Chestertonians are working ever more closely with Chestertonians abroad – not just Americans, but with Italians and Africans. These groups are of a practical nature. The Italians have started small schools and farms. They, in turn, are linked to the Chesterton Centre in Sierra Leone, who are developing projects for rural education. The head of the Sierra Leone project is John Kanu, who studied in Oxford and became interested in Chesterton after studying at the Library before it was moved from Plater College. It remains to be seen whether European Distributists take heart from the African example.

As for why dandelions...

The gift of a dandelion

People are inundated, blinded, deafened, and mentally paralysed by a flood of vulgar and tasteless externals, leaving them no time for leisure, thought, or creation from within themselves.
The whole modern world has divided itself into conservatives and progressives.
The business of progressives is to go on making mistakes.
The business of conservatives is to prevent the mistakes from being corrected.

RESEARCH ASSOCIATED WITH THE LIBRARY sponsored by Second Spring Oxford.